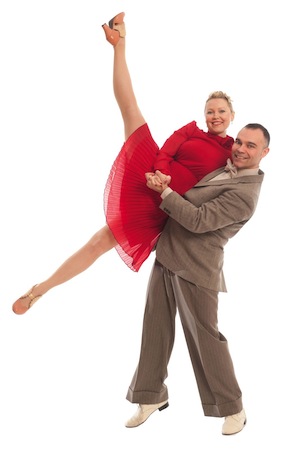 Natasha and Olivier are successful instructors, competitors and performers. They have won numerous contests and In April 2013 at the Balboa Rendez-vous, they were the first European couple to win the title of Champion IBC (International Balboa Championship) in the famous Balboa Pavilion in Newport Beach (USA) ! They also placed 3rd at the highest ranked Balboa competition in 2011, the American Classic Balboa Championships. More than competing they enjoy social dancing and sharing their passion with others.

Natasha is Russian and has been dancing since she was seven (ballroom dancing, competing and teaching at a very high level). In 2001 she discovered swing dancing and simply fell in love with it. She joined innumerable swing dancing workshops in Russia and other countries, and soon became one of the best Russian dancers and teachers. She fills the most complicated step with grace and makes it look so easy.

Olivier is French and discovered his big passion for Swing in 2001. He started competing and soon he placed under the first eight in the French Boogie Woogie ranking list. Olivier is one of the best leaders in the world and bewitches each lady with his French charm and esprit.

They have met each other at the HerrÃ¤ng Dance Camp in Sweden in 2001 and soon decided to team up as a dance couple. They started teaching in 2003. They have build up regular classes in Toulouse and in 2005 when they moved to the CÃ´te dâAzur near Cannes, they have started to develop the Swing culture there.

In 2006 Natasha and Olivier started competing together and became NJC Balboa Champions in the Amateur division for their first run in US Championships and 5th in the NJC Lindy Hop Championship and jumped up into the Pro Division. During the same year they became finalists in Jitterbug competitions in Italy, Munich and in the Balboa Open (BOTP in Cannes), the Euro Balâ Cup (Frenchie Balboa Festival in Toulouse) and reached 3rd place in the Balboa Cup at the Rock That Swing Festival in Munich.

They are permanent students in all styles of dancing and are constantly trying to learn how to improve their skills and way of teaching. They compete for fun but they enjoy especially the social dancing and exchanges around the world by sharing their passion with others. Their blend of two cultures has been creating an original style of dancing and a very personal style of teaching in particularly all kinds of swing dancing: Lindy Hop, Boogie Woogie, Balboa and West Coast Swing.

Their creativity and musical synergies are matched and their professionalism, kindness and humour take them to teach in some of the biggest camps in the world of Swing. They are also the main organizers behind the acclaimed festivals Balboa on the Promenade and Westie on the Promenade which happen annually at the Cote d'Azur.